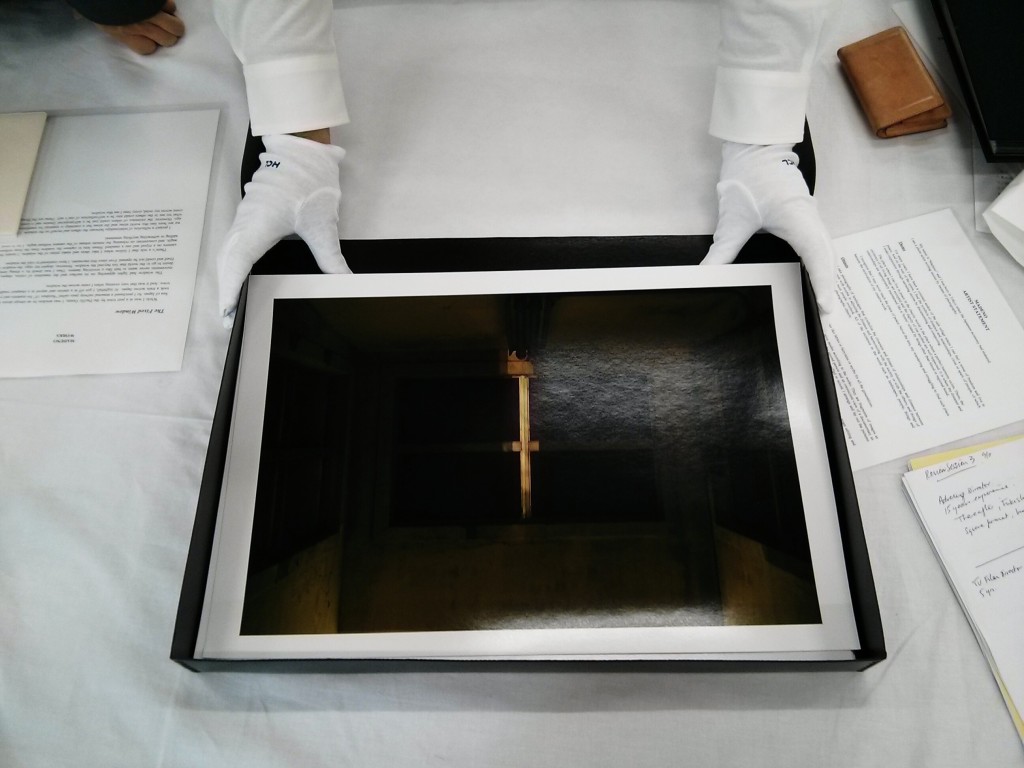 First day of the festival began with a hard-hitting full frontal assault on the senses with Antoine d’Agata’s 20-minute video screening of his brutalistic body of work at the YMCA venue on Mt Rokko. Anton spoke, or rather answered questions about his style and approach, his sharing of personal space in which he leads the viewer to an abyss of self-discovery, with his hallucinatory and often grotesque images of personal sexual encounters. He explains his philosophy of ‘intimate and journalistic’ practice as a personal way to document the world around him, photographing the ‘violence’, not liking the aesthetic form which he says now permeates Magnum, which he sees as a compromise, and is useless to him. His subjects now comprise of ‘violence’, which he says exists today stemming from institutional, economic, politics, war and marginal populations of society. Through precise methodology, as clear and lucid as possible, his works even covers architecture.

He also photographs the opposite side of this state – the population that is against society, the reaction to this violence – ie. victims who are at the receiving end this violence. He hints that perhaps this approach does not mix, but in his mind it does. In his video, he shows the Japanese audience a part of world where most do not have access too. Photography as a ‘way of seeing’ is very lazy he opines, as a spectator. He prefers being part of the photography and creating images in which he is embedded within. Documenting human beings’ relationship with the world is more complicated than just looking.

After a quick lunch at the Rokkosan Terrace restaurant we headed back to the YMCA to begin the first of the review sessions. These went by smoothly and completed on time from 1pm to 5pm. Each reviewer met at least 8 photographers with a 20-minute slot each, firmly adhered to. My reviewees ranged from highly experienced to keen amateurs, from late 20 to early 60s all thoroughly enthusiastic about their craft. All had very strong content, some more polished than others, and presentation was in the highest order, as expected. We each had an interpreter and Ayako did a fabulous job. I am honoured and privileged to meet so many talented photographers, and also my fellow reviewers, who are some of today’s most dedicated educators and advocates in the world of contemporary documentary and fine art photography. In the early evening, everyone gathered at the Rokkusan Hotel again at the Ajisai Room for the International Symposium.

Naoko Ohta, influential curator from KLEE INC Paris Tokyo talked about the current state of Japanese photography, and how it lacked education in the widest sense, from the youth upwards. She also reminded local practitioners to be more visible through active participation in international festivals, workshops and events. She laments the weakness in contemporary Japanese photography as being inward looking, and lacking depth in their works. Next to talk was Laura Pressley, executive director from CENTER, which runs the Sante Fe photography programs and renowned portfolio reviews, and also Amber Terranova from Bilder Nordic School of Photography in Norway. Each shared their views on the state of photography in the world today, the increasing importance of the value or ‘experience economy’ in all consumer structures, and gave their candid thoughts on the future of photography – about making relationships, fostering communities and connection in career progression. Amber also touched on the growing necessity and skills by photographers of story telling in their work, which often begins as personal funded projects and showed some examples of photo-stories by well-known photographers whose works were later recognised and published.

All in, I can say I really enjoyed meeting with new photographers, especially from Japan. Their desires and wants are the same as photographers in other parts of the world. Guidance and sharing is vital. Laura’s closing tonight summed it up. “Commit to an idea. Be patient. Young photographers need time to ripen. It is not a sprint, but a marathon.”

After a hearty breakfast at the hotel, we started the second day of reviews on time at 9am. A full 2-session review took up most of daylight with a quick lunch at the YMCA canteen, in between. Following the closing of the review sessions, we have each seen and evaluated about 25 attendees’ portfolios over the weekend, shared and communicated with each photographer, and looked at several hundred individual images. The entire party then headed to the Alpen Rose mini ‘dry’ ski centre, to attend the Open Review session, which is also open to the public. This allowed each participating photographer the opportunity to show, share and view each other’s works in an open and casual manner, and I think this is a fantastic set up. The day ended with a screening by guest photographer Hiroshi Watanabe and a Q&A panel discussion with the principals of the festival, led by none other than Antoine d’Agata speaking French – Japanese through an interpreter. It was most bizarre for us English speakers. Lastly, Takeki Sugiyama, closed the festival with a brilliantly compiled slideshow by Emerging Photographers, to an atmospheric and contemporary soundtrack.

The evening ended in a celebratory mood with Takeki-san, festival chairman toasting everyone involved, at the Zine Cafe, a mountain top restaurant and bar with breathtaking bird’s eye night views of Kobe city and it’s harbour.

Three Satellite Event workshops organised by the festival today. First, an educational workshop involving families and children, engaging and valuing the art, at the YMCA was given by Laura Pressley and Amber. The second was a photography workshop by Tsuyoshi Ito from the USA, on Project Basho and the third, a publishing talk and photobook workshop by specialist independent publisher, Fabrice Wagner of Le Caillou Bleu from Belgium. 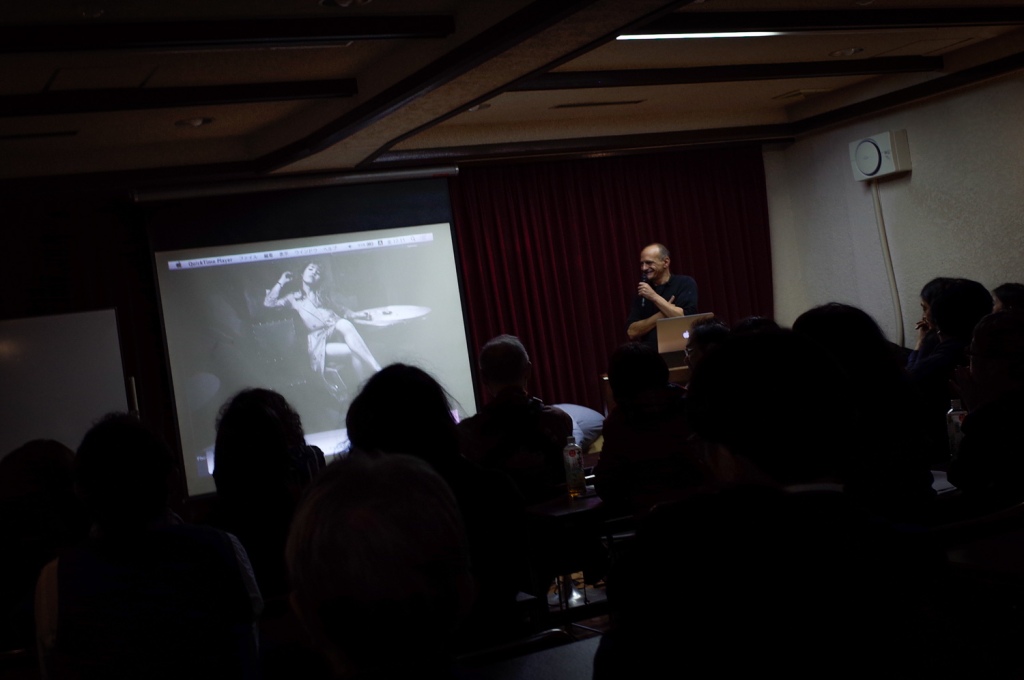 I think it will be a very good experience for new photographers to attend the portfolio reviews of this festival next year, as it will surely be beneficial from the sharing and networking, as well as the advice and direction  given by reviewers as well as fellow photographers. Although new, this festival has the personnel, drive and the know-how to only grow.  The increased confidence and enthusiasm I have seen in these photographers when they came into the review hall on the first session and on the last evening was clearly noticeable.  As a reviewer, it also opened my eyes to a great many new works and styles of Japanese images and it is always appreciative to learn that the guidance and direction I have given is taken to heart by the photographers. It evident to me that the earthquake and Fukushima disaster of the recent past has greatly affected the collective psyche of this nation, and thus reflected in several portfolios.

For serious  young photographers, it is actually vital to have one’s work reviewed especially by overseas reviewers in terms of visibility as these are great opportunities that may be career changing.