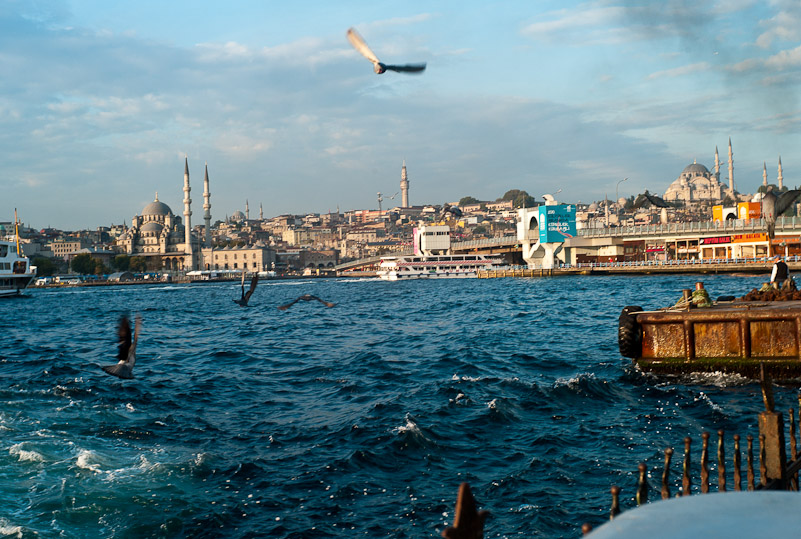 Troubled waters ahead. On the first day of the new year, a gunman dressed as Santa Claus entered a nightclub on the Bosphorus and killed over 39 people, as hundreds celebrated the New Year. There’s an unspoken protocol in the UK that the Brits do not normally discuss politics and religion at dinner tables, and presumably Brexit also.

However, as I see it, these subjects define who we are and how we exist – politics have to do with every facet of our modern connected lives, from the price of oil to the car we drive, and sadly, our day to day security. Everything is connected. Europe is currently facing an unspoken crisis and this will only deepen in the coming months as Britain prepares for Brexit and the EU sees several General Elections in 2017.

We scorn at the opinionated and so-called experts, but I fear those who have no opinions more, as you don’t know where they stand.

Stealing a kiss on the Bosphorus, Istanbul, 2010 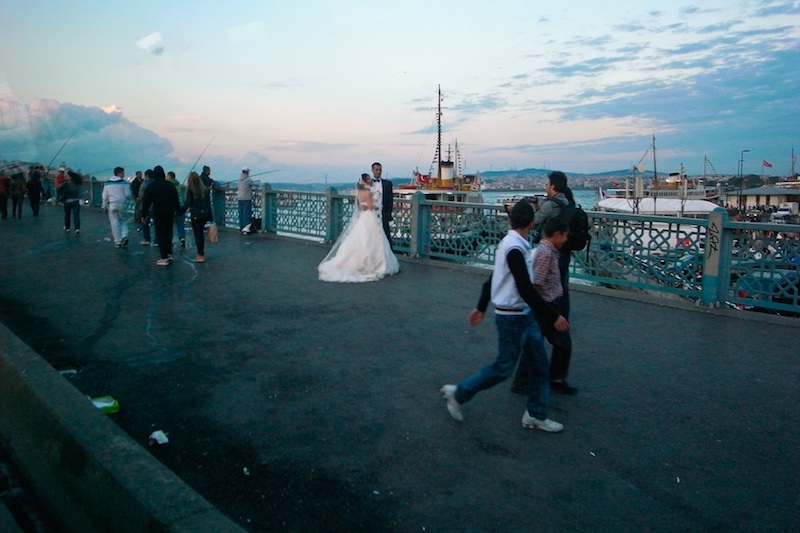 The photo workshop participants parted company on Sunday afternoon, and departed back to the East and the West, just as quickly as they arrived 5 days earlier. This was a most memorable trip partly due to the amazing, breathtaking location, the City of 100 Names, Constantinople, the Second Rome, that is now Istanbul. We ran through everyone’s Mini Assignment slide-show, and we saw a variety of styles, themes and creativity that was of a high standard. We hope all of you have some little thing you have discovered about general photography over the last few days, from learning more of your camera functions, choosing lenses, to shooting manually, using a light meter, composition, editing and adding effects.

The most important aspect in photography is that your images must ‘speak’ to the viewer, otherwise, it would  be a generic postcard image. Please post your feedback below and also send me your images, as I will put up everyone’s best images soon!

“Smiles on The Bosphorus” is Andy’s themed assignment shot during a 2-hour river cruise on the Bosphorus. Andy simply approached fellow cruisers and asked to take their portraits with his Nikkor 50mm F1.2 lens. Simply amazing bokeh!

I decided to go atmospheric and moody, to represent the centuries of strive, conflicts and conquests that shaped this historic city centred around the ancient monuments of the Haghia Sophia, Sultanahmet Mosque and the Hippodrome. Photographing in the calm of night was a surreal experience, devoid of the crowds, noise and distracting colours by day.

Composing with her viewfinder through her various funky eyeware, Fun manages to capture candid Turkish eyes looking back into her camera lens like a pro!

John’s trusty little compact Canon G11 brought him many great images from inside the Blue Mosque and also the Haghia Sophia. As well as being the only participant that photographed the group out on their prowl for imagery, his sense of English humour entertained us all to no end! Thanks for the champers too. Heard you had a ‘romantic’ dinner on the Bosphorus too.

Bruno set out to rediscover photography after a lapse of several years, and made his theme ‘Istanbul on the Move’, capturing the movement of locals and visitors, transportation and general scenes from various angles and places within the city. Many Happy Returns!

Ivy’s energy is unsurpassed and she goes bounding up to people and easily connect with them like a long lost friend. She picked a theme she’s best at, people shots, and came up with this amazing slideshow.

Steve managed to photograph a sequence of an LCD advert outside the Spice Bazaar, combining a sweeping landscape at dusk juxtaposed with a mosque in the background. His statement shouts out a clash between modernity and tradition, old and new, secular and the religious. Simple and yet brilliant.

With an eye for detail, Sonia has managed to photograph striking design elements within the Blue Mosque and Haghia Sophia with her telephoto lens and also super-wide angle architectural studies.

Fernando’s architectural background has allowed him to see shapes, patterns, and textures in the built environment all that more clearer and this is evident in his photography. ‘Geometries’ is a gallery of sublime images beautifully photographed.

Women In Istanbul is Kirstin’s project theme, photographed during the 4 day workshop in this great city. Highlighting the many designs and styles of headscarves worn by local women in the Blue Mosque, at the waterfront, by the Spice Bazaar and the ferry port.

“Snaphots of Istanbul” is Jayne’s title for her slideshow, capturing scenes from the Blue Mosque, the Bosphorus, and the Sultanahment area. Her images of the boats are particularly arresting as are those of the Galata bridge from distance.